THE ORIGIN OF FERRIN

Schlafly (Ferrin) got its start in the late 1880’s. The records show that it was platted as the Village of Schlafly, Clinton County, Illinois on June 12, 1895. It is located in Meridian Township along the B & O Railroad, in the heart of rich farming country that was inhabited by very prosperous German citizens.

It was also known as Clinton Switch, but because Illinois already had a town by the name of Clinton where goods were often shipped by mistake, the B & O Railroad officials ordered the name be changed to Ferren. The village was named Ferren in honor of Pingree McFerren, a popular railroad conductor on the B & O Railroad. In February 1905, the name Clinton Switch ceased to exist on the railroad station signboard and was replaced by a new sign with the name Ferrin.

In the 50th Anniversary Book of Bethlehem Lutheran Church, Ferrin, IL, it stated, “In the spring of 1905, 18 members who lived in the northern part of the Hoffman parish, and who because of distance found it difficult to attend services at Hoffman and to send their children to Hoffman School, assembled at Ferrin, IL, to discuss the advisability of organizing their own congregation at Ferrin. The Hoffman congregation gave these members at Ferrin permission to organize their own congregation, and they were also permitted to gather funds in the Hoffman and neighboring congregations for their church building. It was made plain, however, that their release at this time applied only to their voting right. They still had the duty of supporting the ministry in Hoffman, and of submitting to the constitution of Trinity congregation. On June 4, 1905, it was resolved to organize a congregation bearing the name of Bethlehem Evangelical Lutheran Congregation of the Unaltered Augsburg Confession at Ferrin, Clinton County, Illinois. The old constitution of the Hoffman congregation was unanimously adopted.” 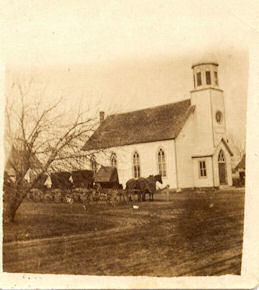 Shortly thereafter, the church building was erected. As stated in the Carlyle Union Banner in 1905, “The church was built on the lovely little hill, north of the residence of F. W. Michael.” The site was donated by the Schlafly Bros., who owned a large number of acres around Ferrin. A few months later, the Carlyle Union Banner printed this article. “On September 17, 1905, a crowd estimated at 400 persons assembled and witnessed the dedication of the new German Evangelical Lutheran Church. This edifice would be a credit to a small city. It is a frame structure 50 feet long and 30 feet wide, with a spire 65 feet high, and the cost was $2,000. The builder was Louis Johnson of Hoyleton, and he deserves much credit for his excellence of work. The dedicatory sermon was preached at 10 o’clock by Rev. Brockmann of Hoffman, after which Rev. Kissling of Chicago was duly installed as pastor. Rev. Schoenleber of Beaver Prairie then preached a sermon in German. After this a splendid dinner was served on a table seventy five feet long under a canvas awning on the church lawn. This was cooked and served free by the ladies of the congregation, and many were the compliments passed on their culinary ability. After dinner, Rev. Amberger of Nashville preached a sermon in English. The vocal music was led by Prof. Schueiler of Hoffman. Supper was served at 5 o’clock, after which the many visitors departed for their homes.”